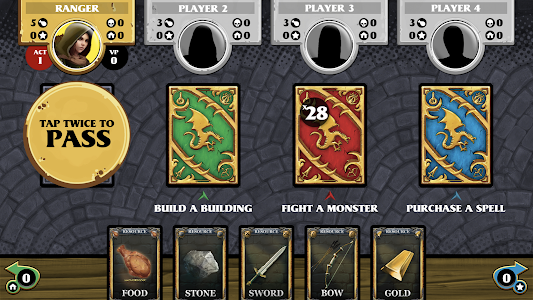 Long ago Draxia was overrun by monsters and magic. Legendary adventurers arose and brought hope by slaying beasts building cities and mastering the mysterious mana.

Unlock Draxia Universe lore as you construct buildings fight monsters and purchase spells. Complete achievements as you progress through the game and if you're good enough - see yourself up on the Leaderboard!

This digital version is optimized for solo play against 3 AI opponents. It includes all twelve characters from the original game plus three additional: the Builder the Dragon Slayer and the Merchant. Each AI has their own tactics and strategies created by Jimmy Sanders game designer of the original physical board game released in 2016.

Legends of Draxia is a victory point resource management indirect competition fantasy game with a 35-45 minute play time. Players can adjust the difficulty by selecting Easy or Normal mode. There are multiple paths to victory. Whether you’d like to carve a path to glory by slaying monsters gather resources to build cathedrals or focus on casting powerful spells there’s a character optimized for that. With so many characters and so many paths a winning strategy in one match does not guarantee a victory in future playthroughs. Perfectly replayable!
Show More >