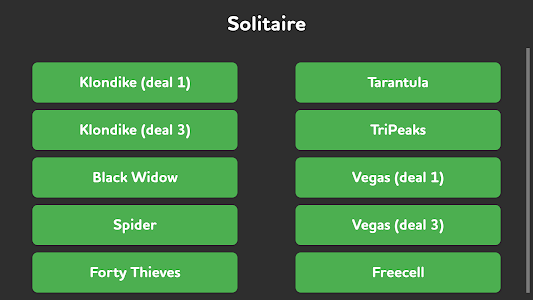 Solitaire is a fun card game to enjoy at all ages. Every time you play solitaire you compete with yourself for your best high score. Play card game for free whenever you like - when at work school or home.
Klondike Solitaire is the most popular card game around. Card Game Solitaire does it better than the rest offering smooth game play and an undo button. Create stacks of cards on the solitaire board by stacking cards downward alternating color. Click through the stock cards to add extra cards to the solitaire game. The ultimate goal of Klondike Solitaire is to add all the cards into their foundations in the top right based on suit from Ace to King.

In France the card game is sometimes called "Success" (reussite).
Other languages such as Danish Norwegian and Polish often use the word "Kabal" or "Kabala" (secret knowledge) to describe these games.
Show More >