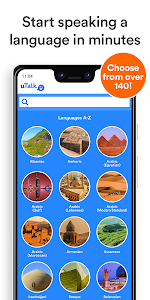 Learn languages fast: uTalk gets results because every word you hear is in your new language and you speak listen and understand from Day One.

The app has a huge range of 140+ languages and with free starter words in each you can try it risk-free. Score full marks in the games and you can also unlock an extra topic in your language for free.


uTalk helps you speak a new language for these 3 reasons:

1. Learn from the locals: We record native speakers so you can hear every word pronounced clearly. We then get you to mimic their pronunciation and compare your intonation with theirs. Practise until you get it right – you can even slow the audio down if it’s too fast.

2. Crammed full of words: Useful everyday words and phrases. Topics like Food and Drink take around two to three hours to complete. But you can dip in for just five minutes at a time or longer. With 60+ topics that’s a total of 180 hours of learning.

3. Keeps you motivated: Check your scores on progress bars as you move through five progressively difficult games. To get full marks you’ll have to know the words as well as your own language.

Who’s it for? uTalk’s tried and trusted way to learn a new language has been developed over 25 years and is perfect for beginners. But because of its wide-ranging language it’s also invaluable for intermediates looking to fill in gaps in their vocabulary and pronunciation.

How it works: Subscribe to everything on uTalk or buy individual languages or topics. Learn on any device at home or on the move. The app automatically syncs between your devices. Work offline by downloading content.

Thanks for those of you who have rated uTalk on the Play Store, this is a big encouragement.

- Issue with the screen keyboard not showing up on Android 11 has been fixed.

Got a question? Spotted a bug? Comments on our jokes? Please contact [email protected]

Alpe Audio: Courses On the Go

Citymapper: Directions For All Your Transportation 10.39.1

Tandem - Master Any Language with a Native Speaker 3.0.4