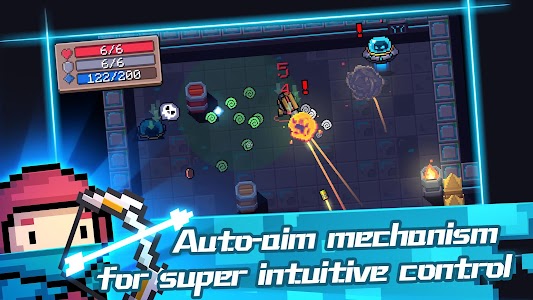 We honestly can’t keep making it all up. Let’s just shoot some alien minions!

This is the game you have always wanted in your subconscious. Explore the dungeon collect crazy weapons dodge bullets and shoot‘em all up! Extremely easy and intuitive control; super smooth and enjoyable gameplay mixed with rogue-like elements.

Features:
* Unique heroes with unique ability.
* 270+ weapons waiting for you to explore.
* Randomly generated dungeon world new experience every time.
* NPCs that actually matter! They will fight by your side!
* Auto-aim mechanism for super intuitive control.
* Many more features that you will find out in game.

Note:
* To use the screen recording function permission to write to external storage is required.

DPI:nodpi
Adjustments made to the new season mode:
*Added special attack effects to guards of swords and handles of staves.
*Added the blueprint of Sword of King Hero. Defeat the boss at level 3-6 at badass difficulty to get it!
*Increased the attack power of bows and shortened their charge time.
*More coins to loot.
*Adjusted the number of coins needed to upgrade a part/modifier.
*Knight’s first skill Dual Wield can no longer double the effects of modifiers.
*Tweaked some modifiers.
*Fixed bugs.
Show More >