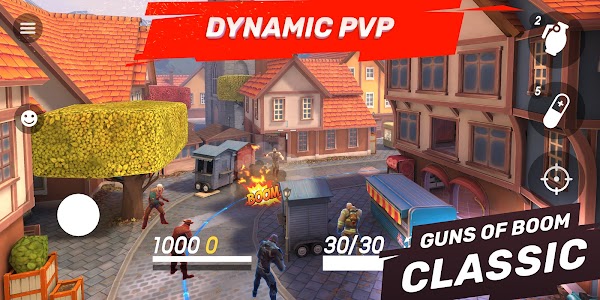 • Easy and intuitive controls: get a hang of the game from the get-go and start climbing up the ranks!
• Vivid graphics and support for older devices: stunning visuals will keep you glued to the screen while the hardware requirements remain very moderate.
• Engaging PvP battles: enjoy team-based fun across numerous maps and game modes. The adrenaline-filled action never stops in GoB!
• Character customization: create a unique hero by using a combination of various perks and equipment skills and find the perfect look with hundreds of cosmetic items. Creating a flexible build for your play style is as easy as ever.
• Regular updates and events: with constant content additions new features and colorful themed events you’ll never be bored. This game just keeps on giving!
• Pro Play Mode: eSports events with players from globally acclaimed teams. Can a mobile FPS be truly competitive? You bet!

Guns of Boom is a competitive multiplayer FPS with awesome 3D graphics and gripping gameplay. It’s so simple that your cat could learn the controls but the skill-cap is high enough to spark the interest of competitive eSports players who’re used to extremely challenging and clutch tournament-style battles. Engage in online PvP battles on a variety of maps utilizing different cunning tactics. Get the ultimate FPS experience with fast-paced matches that take less than 5 minutes on average. The game is on!
Show More >

ACT 2, SEASON 6: FUTURE COMBAT
Put on the state-of-the-art gear, load your weapons, and get ready to face the future! This season, we’re taking a peek at the futuristic warfare of tomorrow, where a single well-equipped squad can take on whole armies!

Final Destiny - Beyond the End of the World