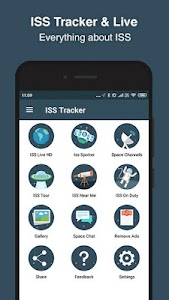 ISS Tracker is a simple app to track the location of the International Space Station (ISS) 🛰️ over the earth. It also shows live HD stream from ISS Camera. You can view the earth from Space live. You can also set Alarms using this app so track when the ISS is passing over your home. You can then use 🔭 telescope and view it. You can also view list of 👨🏻‍🚀 space scientists on duty on ISS.

Does astronomy interest you? Do you wish to see the earth live from the International Space Station?

Well now you can see the earth just as the astronauts see it and this is made possible with a 24/7 live video streaming from the International Space Station.
If you are someone who is intrigued by astronomy or space you will surely love ISS Tracker.

ISS Tracker is designed to give you access to live video feeds of earth from the International Space Station. This app is meant to give you a beautiful experience along with numerous exciting features and customisation options.

With the help of this app you can get to see amazing views of the earth from the International Space Station that is orbiting about 400 km above the planet.

The app is integrated with Android Google Map which helps track the orbit of the ISS at all times. It allows you to configure various settings to give you the best experience. You can rotate drag tilt and zoom the map according to your wish. You can even choose the type of map you want to see and get data such as latitude and longitude altitude visibility and the speed of orbit. You will also get to know the name of the country where the ISS is located. Every piece of information given to you is accurate. Also you can customise each of these options from the menu.

With this app you can experience the day-to-day life of the astronauts and watch them work inside the ISS.

Live video transmission from Space is available through:


Do you want to see the International Space Station?

ISS will also let you know the time and day of the International Space Station’s visible passage. You will also receive notification alerts on the following events:

- Sunrise and sunset at ISS
- Day pass: You can see your country through the live transmission of the cameras of the ISS.
- Visible pass over your region: With the help of the compass tool you will get to know the exact place in the sky where the ISS will be visible to you and for how long.
- ISS day passes in other countries: You can use the manual tool to know the ISS orbits over other countries of your interest.
- Special Events: You can also know about the arrival/departure of new crew launches spacewalks experiments communications and a lot more.

Check out and do share your feedback with us via Reviews & Comments.
Show More >