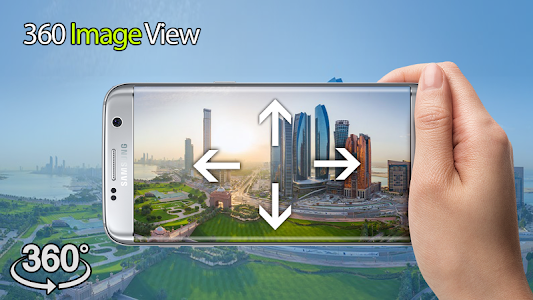 Are you fond of adventure? wants to see 360videos?
Here is an attractive and innovative video viewer where you can see videos enjoying a true 360 vr experience with real-time movements. You can control video and can seek a different position in your movie or use the forward and backward button on a 360-degree video viewer.

Panorama Video Player 360 Video Image Viewer surprise you with its collection of dynamic video experiences.360 player play every supported video including 3D and 360. Our 360-degree video player will give you the best experience for watching 3D videos. You can watch videos with our panorama viewer online like in a movie theater as they have never been seen before.

Our 360 panorama app works on any phone limited only by the device's video capabilities. It is a much easier app than any other 360 photo app. you can watch high definition videos and movies in different formats like MP4 MP3 even in 360 modes with our 360 degree video player. All of these adventures are only possible with our 360 player. You can view the technology of virtual reality from your phone with this vr video player.

Our Panorama Video Player 360 Video Image Viewer app gives you perfect support for all kinds of subtitles and music files. 360 panorama viewer online free will entertain you with its growing collection of dynamic features and modes. You can select your favorite mode with a simple configuration.you can get the most immersive virtual reality experience with our 360 degree images app.

This 360 viewer online or mp4 video player will explore your environment like you're in the scene. our panorama viewer app makes you feel like you are in VR cinema or theater. So to enjoy all the wonderful features of our 360 degree viewer just install a video media player and leave the rest of video players behind of 3d video player. you surely love our 360 video or 3d videos app and once you installed you will forget all other such applications. mobile video player is one of the vr or vr video player or hd video player on play store.

If Virtual reality was your dream so you can make your dream come true by our panorama 360 media player by watching 360 live videos. free Video Player has great support for all common 3D/2D video player all format and modes including 180360 and 720. You can navigate or record VR videos at a 360° angle with our 360 apps or view 360 apps or best VR video viewer.

So Hurry up!! Download our 360 panorama 3d video player and enjoy all of its features without any hesitation
Show More >

Media Library (All what you need!)