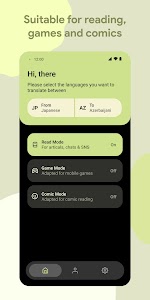 AI Screen Translate - The fastest Real-time translator for image game comic browser SNS apps and everything on your screen which allows you to translate more than 100 languages into your native language.

No matter when you are entertaining or when you are reading and studying AI Screen Translate will help you be more immersed and have fun.