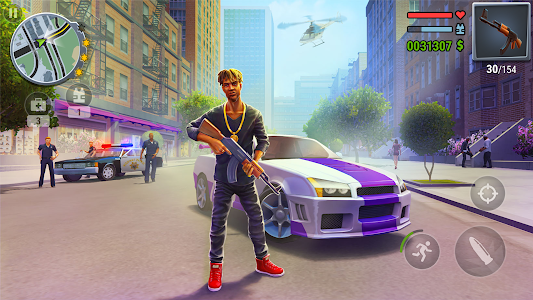 Ready to try your destiny in a gangland?

Install Gangs Town Story and become the head of the mafia!

Welcome to the real life gangster simulator. The underworld has always existed. Become a real hero to kill the gangster mafia in the great war. Explore the mafia world with its gangs skirmishes and puzzles. Only you decide what to do and when!

Your goal is to create your own criminal state. Immerse yourself in an open world with shooting racing brawling gangsters thieves and corrupt cops. Complete various missions and destroy enemies.

This great open city is filled with gangs thieves and cops. Tall skyscrapers and luxurious living attract criminals. Take part in gang wars. Steal cars and fight cops. Conquer neighborhoods and become the head of the mafia! Explore every inch of this grand open city where every vice has a price.

This gangster world-of-crime game is full action missions street fights with gangs and police anytime and anywhere car thefts and crazy city driving around the grand open world! Join the action and claim your turf! Defend it from rival crime gangs and raid others. Start getting resources that will be useful to you for the future criminal war.

You have all the tools to become a real gangster. Use hundreds of grand guns and vehicles. Pick up your personal arsenal of weapons and create a stylish gangster. Earn respect on the criminal streets. Use deadly guns flamethrowers grenades and much more. Defeat gangsters and police. Conquer enemy gang areas and create your own great gang. Arm yourself and hold your territory.

It is a perfect crime game for fans of third person shooters tank and car driving mafias and gangs. Choose a car of your liking and complete many spectacular missions. Steal and create your own car park. Organize car races and escape from the chase. The cops and gangsters will chase you but you can win. Use the tank to have fun and defeat the police.

Try on different outfits and create your own crime style. There is a large clothing store available for your character. Some pieces of clothing unlock additional superpowers. These abilities will help you complete missions steal and defeat gangsters. Clashes with the police will get more exciting.

It's time to become a real hero in an open criminal city. Arm yourself steal cars and fight the police. To defeat enemies complete missions and build your great criminal empire. You will emerge victorious in this war.

Install Gangs Town Story to get the gold standard for open-world action games!

Sin city is waiting for a gangster like you. Run the great world of crime. Become the head of the mafia!

! This game is not a clone of GTA V GTA San Andreas or GTA Vice City. The game has its own unique storyline. Many mechanics and actions are proprietary that are not found in other games of this style.