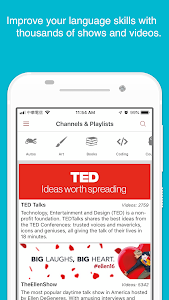 Use our awesome bilingual dictionaries to look up words and interact with video subtitles and web pages. Our dictionaries are free work offline and have no ads!

Practice commonly used vocabulary tones and accents while watching a huge library of popular shows from all over the world. Immerse yourself in thousands of movies TV shows interviews and presentations and if you aren’t sure of any words you come across just tap on the subtitle for immediate definitions in your own language.

• A movie or video playing in Woodpecker can have two subtitle streams running simultaneously. For instance one in English and one in Chinese.

• Touch on a word in a subtitle stream to see the possible meanings in your language. Touch on a word or character in your own language to get the definition in the language you are learning

• To improve your listening power you can continuously replay a single sentence go back five seconds to repeat content and play the video at a slower speed. Touch on a subtitle's timestamp to go to that point in the video.

• Improve your English with more than 450 YouTube channels with English language audio and subtitles. Many of these channels also upload subtitle streams in other languages.

• Immerse in Mandarin with over 80 channels and playlists that have over 15000 videos. Over 500 of these videos also have a second subtitle stream in English.

• Immerse in Spanish with over 200 channels and playlists that have over 30000 videos. Over 10000 videos also have a second subtitle stream in English.

• Immerse in French with over 60 channels and playlists that have over 7000 videos. Over 2500 of these videos also have a second subtitle stream in English.

• Immerse in Vietnamese with 200 videos from eight channels.

• We also show the YouTube channels of many popular language teachers.

• A list of the videos you've watched and the words/characters that you've touched can be seen in the history tabs.

Use the web browser inside the Woodpecker app to browse foreign language websites and touch on any word or character that you need help with. The definition will be displayed in your language. Our dictionary functionality works on the most popular news websites for free.