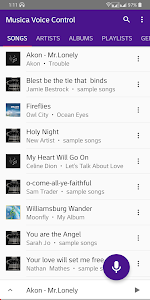 Musica™ is an advanced music player for music voice control. It allows you to play songs stored on your device with the power of your voice. Just speak the name of the song artist or album and this app will start playing the songs you want to listen. Musica player features a beautiful fast and intuitive interface and lets you play all of the songs on your phone. It saves you time as you don't have to browse through the playlist for the song you want to play. Just speak and it will play!

Musica player's speech recognition accurately detects your voice commands. To give voice commands tap on the button with the microphone symbol on the bottom-right side and speak when it turns red. You may also say wake up word instead of tapping on mic button for hands free operation in Pro version. Not only you can play songs but also control music playback by speaking the following commands:

• Make sure you are connected to internet to get accurate speech recognition results.
• You don't even need to speak full name of the song . For example if you want to play "Summer of 69" then just speak "Play Summer" or simply "Summer".
• If you speak artist (singer) or album name then Musica player will play all songs of that artist or album back to back.