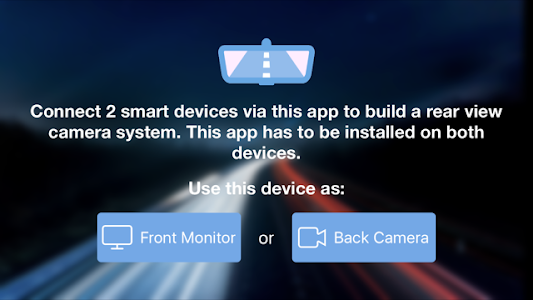 Create a rearview camera system with two smartphones – and that for FREE!
Your current smartphone is used as a monitor near the driver. Your "old" unused smartphone finds its place "behind" in the car and uses the camera functionality. The app connects the two smartphones the camera of the "old" and the monitor of the "new" mobile phone - the rearview camera is finished.
If you want to use the reversing camera ad-free and with the recording function is a small surcharge due (Version Advanced).
A Pro version with special features is planned for the future.

REMINDER: the transfer of the video is very battery consuming especially for the camera phone. If you want to use it for an extended period make sure to connect it to power and/ or switch the phone off after use.

Attention SAMSUNG users: The use of Samsung devices with FreeRearviewCam can be recommended only to a limited extent. Due to an individual implementation of the Android guidelines every reconnection between the sender and the recipient phone requires a new validation on the sender's mobile phone. This means that the user has to validate on the sender phone (eventually mounted in the rear of the car) each time they use the app. Unfortunately we could not change this so we have to dissuade from using the app with SAMSUNG devices.

FFmpeg info and licensing compliance
This project uses FFmpeg for video processing. It is calling a precompiled FFmpeg binary as external process. You can find the source code used to compile the FFmpeg via https://www.freerearviewcam.com/ffmpeg
Show More >