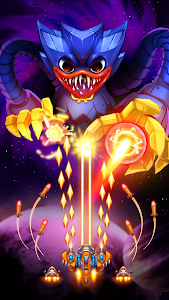 If you are a big fan of arcade shooting games with the new modern combat and want to bring the freedom in the galaxy games Sky Raptor: Space Shooter is a perfect game for you. With the free arcade space games genre a classic game with new context Sky Raptor: Space Shooter puts you on fire with infinity space shooting. You will fight against tons of evil enemies and deal with many striker bosses in galaxy wars to protect the earth from alien invaders. Are you sure you will survive in the war of galaxy shooters?

HOW TO PLAY:
👉 Touch the screen to move your spaceship shoot and dodge enemy's bullets to defeat them all.
👉 Collect coins gem and items to upgrade or evolve your spaceship.
👉 Use appropriate spaceships and strategies to pass levels and defeat the boss.
👉 Let’s use active skills to boost your power immediately.

🚀 Perfect Shoot ‘Em Up:
Many spaceships with unique design & skills. Choose your main-ship and sub-ship to build your own space squad.
Diverse Equipment System: Various equipment to support you in shooting the alien invaders which can be combined and upgraded to activate Fusion to unlock numerous hidden attribution.
Diverse Quest System: Daily quests lucky wheel free gems badge rewards every day for you to conquer.
🚀 Challenging Campaigns: 200+ levels with various difficulties challenging you to save the galaxy.
🚀 Survival Mode: Unlimited mode allowing you to play endlessly through each battle. Let’s start a survival game from alien attack.
🚀 World Boss: Enormous and epic Bosses will prevent you from saving the universe
🚀 PvP 1v1 and PvP 2v2 Mode: Fighting solo or co-op with your friends to win the battle online shooting game.
🚀 Leaderboard: where marks your name and ranking per country and worldwide.

🌌The Galaxy's future is now in your hands. Get your ship ready for space attack in this arcade galaxy shooter game.
**********
👉Follow us on Facebook: https://cutt.ly/DhW8Iag
👉Join Sky Raptor Community: https://cutt.ly/khbe8u7
Show More >