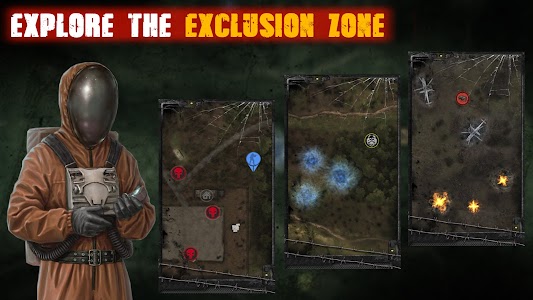 Project 2609 chernobyl games - a game simulator without internet with a story and turn-based battles simulation survival as a stalker in the Alienation Zone in the style of local post-apocalypse or survival .

Deadly anomalies dangerous mutants anarchists and bandits as well as survival in the new Chernobyl Exclusion Zone.
Play without the Internet in a turn-based strategy game Project 2609 chernobyl games . Explore the zone help other stalkers destroy dangerous mutants take part in a faction war gather resources for survival in the post-apocalypse in Chernobyl explore underground secret bunkers pass fascinating main plot and extra quests craft weapons and equipment survive amid radiation and anomalies assemble a team of five for your military detachment play in a war strategy style groups. This and much more awaits you in the offline game Project 2609 stalker in captivity.

☢ Plot.
Chernobyl Exclusion Zone you are offered a dangerous but well-paid job in a secret bunker as a guard. Once you're there an emergency situation occurs and you find yourself in a totally different exclusion zone. Stalker Doc gives you a second chance can you survive and get out of the zone?
The second explosion changed Chernobyl forever. Anomalies radiation and dangerous mutants are not the biggest problem far more dangerous are the other stalkers. Whether you can remain human in the new conditions of the post-apocalypse or change together with the exclusion zone it is up to you to decide!
Single-player android adventure in an atmospheric setting;
Fascinating non-linear main plot;
Many additional quests;
More than 4 unique endings all depending on your choice.
Random encounters and events.

☢ Gameplay Features
Classic turn-based combat system in a modern interpretation integrated into the stalker atmosphere setting;
Combat squad of up to 5 people including the protagonist assemble a squad of the most professional stalkers of the zone;
Arm your team with the best equipment from more than 34 types of weapons 11 types of armor.
Explore hundreds of interesting places in a strategy style with a view from above;
Mine valuable artifacts in anomalies with modifiable detectors;
Stalker strategy with a view from above;
Perform forays into secret underground labs for better loot and money.

And much more. Stalker the zone is waiting for you good hunting stalker!

The game is developed by one man a fan of such games as STALKER Shadow of Chernobyl Call of Pripyat Clear Sky Metro 2033 Exodus War Groups Fallout war groups Stalker 2 Day R Survival War Grops Stalker Strategy. If you like these games too you definitely need to play our game in 2022!

The game is constantly evolving and I would be insanely happy if you could help find bugs. Here's email for contact and suggestions: [email protected]

Also happy to see you in our friendly groups and channels:
Telegram https://t.me/veturgames
Show More >