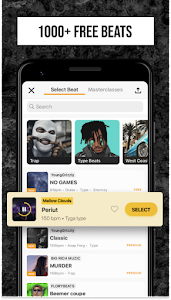 Like hip-hop? Try being a Rapper yourself.
Record Promo & Share tracks w. MILLIONS of fans on Rap Fame

PRO Music Recording Studio
Get Audio & Vocal FX
Sound like a Pro on your phone with the latest Rap Studio.
Rappers use us to get signed by the World’s Biggest Labels!!

Global Rap Fame!
Our Community has recorded and uploaded more than 6 million songs to date. So what are you waiting for?

Pick up the Phone – Drop the Mic!
Show More >

@Rajat1
Find what you want easily with our new Discovery screen!

We've revamped the layout so you'll quickly find the best content and exciting features all in one place.

Liking what you see? Any ideas or questions? Please share your feedback at [email protected]
Show More >