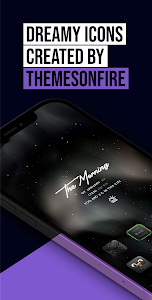 Dreamy Icons is my best creation so far with an incredible amount of detail to each icon. Dark icons and wallpapers are included as well.

Please be warned that this is not a large icon pack. Although it consists of 700+ icons it took 1.5 years to create this. Many generic icons have been added (e.g. bank cards) that can be used for multiple apps. This way it covers 2000+ apps.