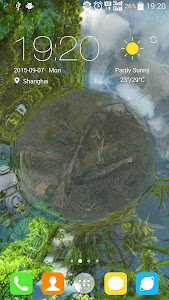 
Use finger gestures to create stunning velvet smooth water ripples and water waves that are unbelievably true!
Watch adorable koi fish happily exploring your pond! Feed or tease these naughty koi fish with your fingers to make them happier!
Choose among a rich set of fantastic natural scenes almost every pixel has been polished deliberately just for your amusement!
A store full of magic items and advanced features makes it possible to personalize your water garden almost in any way you'd like.

3 REASONS WHY WATER GARDEN IS SIMPLY THE BEST APP IN ITS CATEGORY.
✔ Top-class water ripple effects at nearly no cost of extra power loss. Behind this is a blazing fast c++ engine designed purely for water simulation built from scratch!
✔ Koi fish bodies are made of true 3D models that's the only way to build expressive koi animations and subtle koi motions.
✔ High-definition graphics maintain high visual quality on both small displays like phones and large displays like TVs.

No other water-related or koi-related products achieve all above three like we do that's what makes Water Garden the best App in its category!
Show More >

@KirIif'
✔ A lot of users of Chinese smart phone brands like Oppo/Vivo/OnePlus/Realme have been reporting that the Settings is inaccessible due to the customization those Chinese vendors have done to their phone OS.
✔ As a permanent solution, a second entry point in the form of another launcher icon is provided which can lead the users directly to Water Garden's Settings Menu.
✔ Add Arabic localization support
Show More >