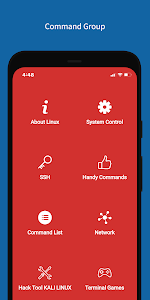 Linux Commands is basically an app developed for Linux lovers who will easily find commands from App. Now Learning of Linux commands is made simple!!

The basic purpose of the app is to learn basic Linux commands. An Linux Commands Library!!

Linux Commands - A unique ALL IN ONE App

SEARCH COMMANDS
* User can search command from the command list.

- All the commands are given in alphabetic order by their command name.
If there is any command you miss let me know and the next update will have it.
Show More >