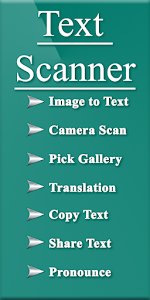 skill Courses OCR Text Scanner is picture to text converter with which you can extract text from picture that either taken by camera or select form Phone gallery and then translate to multiple languages. Text Scanner OCR translate the extracted text from images in European languages such as English Spanish French Italian Dutch Norwegian German Portuguese Czech Slovak Polish Hungarian Welsh Danish Swedish Turkish Finnish and Icelandic user can further pronounce copy and share the extracted text. You can turn the scanned text into speech and read text from photo with TTS (Text to Speech) conversion in almost all languages. Just sit back and listen to the information you need.

Convert Photo to Text: Text Scanner OCR is also Image to text converter is offline free fast easy and simple to use with the latest technology called optical Character Recognition (OCR) which use latest technology to extract text from Gallery pictures or on real time images from camera. Text Scanner OCR is one of the best tools that convert image to text scanner for free very easily and within no delay time.

When you want to record the memo written on the board of your classroom in languages including English French Spanish Italian Dutch Norwegian Hungarian German Portuguese Czech Slovak Polish Danish Turkish Welsh Icelandic Finnish and Swedish. It's very difficult to write it by the keyboard of your device and also it is very time taking. Now save your time you can do it very easily by this Text Scanner OCR app.

Image to text converter: Text Scanner OCR is the best picture translator and image to text converter. This is FREE text scanner & converter application that scan text that can later can be send via email or share on social media or you can copy that text in clipboard and later can be used in any other app. This app is suitable for everyone such as students businessmen journalists etc.

Text Scanner OCR is a powerful app to convert image into text form or Translator scanned text to word and then you can easily use this text anywhere you want. This best OCR text Translator and editor app will help you to access or copy URL or phone number which is written in website or print media like magazine newspaper or brochure in multiple languages such as English French Spanish Italian Dutch Norwegian German Portuguese Czech Slovak Hungarian Polish Danish Welsh Swedish Icelandic Finnish and Turkish. OCR Image to Text Translator is a best OCR scanner for android user to scan text in picture or use to convert scanned text to document. You may easily scan PDF to text by this best OCR text scanner and editor app. Read picture text with high accuracy to convert written text to editable text. OCR Image to Text Translator can recognize photo text then convert into a editable text form and you can further edit the text. The interface of Text Scanner OCR is user friendly and easy to use.