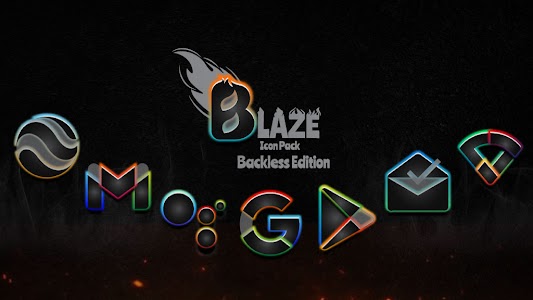 Presenting BLAZE Backless A Well polished Dark icon pack with vivid gradients.
Each and every icon is marvellously crafted in order to achieve magnificent visual experience.
Blaze Backless icons pack works well on any wallpapers. After experimenting with lots of Backless and Vibrant colours finally Blaze Backless Icon pack have been crafted.

An Appeal to the Users:
Feel free to send icon request for missing icons. I tried to fulfill every request but here is an appeal to the users Please send only those app icon
request which is used frequently and keep them on home screen not the one which used rarely and not used for a long time.

A supported launcher is require to use this icon pack.
Icon Size must be 110% to 120% to enjoy great and fresh visual experience.