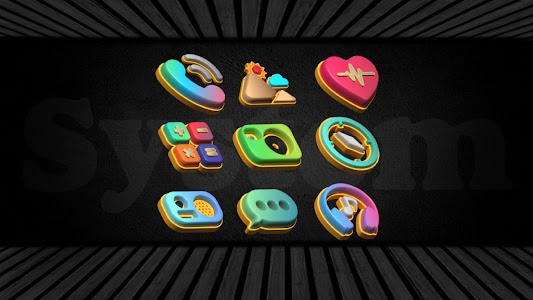 Presenting Auric A Ray Traced 3D Icon Pack with vibrant colours.
Each and every icon is marvellously crafted in order to achieve magnificent visual experience.
Auric icons pack works well on any wallpapers. After experimenting with lots of vibrant gradients finally Auric Icon pack have been crafted.

A Quality Note:
Auric Icon pack have been crafted with creativity to achieve the best possible way to simplicity. Auric Icon Pack have prefect Masks for un-themed icons.
Auric icon pack contains 2100+ icons (Just beginning) and will Grow rapidly these icons with each and every updates. This Icon pack contain 14 complimentary hand crafted matched wallpapers.

An Appeal to the Users:
Feel free to send icon request for missing icons. I tried to fulfil every request but here is an appeal to the users Please send only those app icon
request which is used frequently and keep them on home screen not the one which used rarely and not used for a long time. You can help me in creating this one of the best icon pack on Google play store.

A supported launcher is require to use this icon pack.
Icon Size must be 110% to 120% to enjoy great and fresh visual experience.