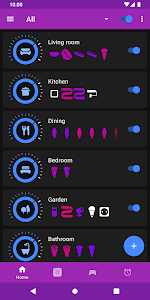 Imagine unlimited possibilities in your smart home. Set scenes and fast effects to your mood.

Feel more in control with schedules and automation from sunrise to sunset. Widgets Shortcuts Quick settings tiles and Wear OS help you get more out of your smart lights.

Control multiple bridges simultaneously without switching between them.

Scenes & effects
Create the perfect ambiance from your photos or the included photo library. Experience special animations like lava fireplace fireworks or lightning.

Wake up at sunrise and go to sleep at sunset with fading lights.

Get into the party on the beats of your music. Sync your lights for a night of disco with strobe effects (updates 25 times/sec).

Quick access
Create rooms and groups to organize your lights. You can even put a light in several groups. Place widgets for temperature sensors easy control of lights setting color and brightness without opening of the app.

Add shortcuts to your home screen for quick opening of your room. Control your lights through an optional notification in the notification panel.

You can set scenes actions or even multiple scenes on a button to make your switch a real investment. Experience the right ambiance during different times of your day with your motion sensor. All of your creations are stored on the bridge. Easy for you and your family.

Make it look like you are at home using 'Away from Home' (out of home control).

You want it all?
Fast performance with ad-free experience. Purchase the premium version to unlock full content.

- Mod Info:
● All premium features unlocked.
● Multiple Bridges unlocked.
● Effects and WearOS addons are unlocked.
● I have only tested the app on DEMO bridge, on actual bridge it may not work as intended, so let me know if anything goes wrong.

Magnifier Plus with Flashlight