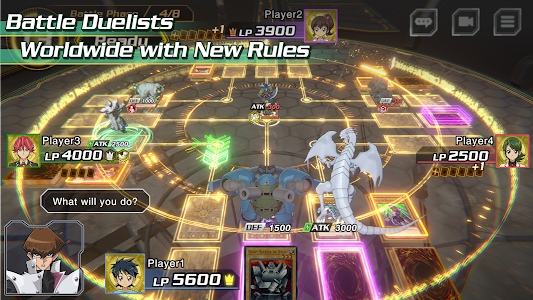 skill Courses Overlapping battles make for an ever-changing match! Duelists will have to pay close attention if they want to come out on top!

▼ What Is Yu-Gi-Oh! CROSS DUEL?
If you want to duke it out in real-time with Duelists worldwide in a brand-new style of card game then look no further!

▼ Three Modes to Enjoy!
In addition to 4 Player Match Mode you can play together with characters from the Yu-Gi-Oh! series in Single Player Mode or head to 4 Player Co-op Mode and team up with other Duelists to overcome a fearsome Raid Boss!
Aim to become the best Duelist in whichever mode suits you!

▼ Characters
Characters from 7 different animated Yu-Gi-Oh! series will make an appearance partnering with Duelists in battle!
Strengthen your bonds with your Partners to take down even the toughest enemies!
With the original cast doing the voice acting Duels feel even more dramatic!

▼ Monsters
All monsters have been rendered with 3D graphics including awe-inspiring Summoning scenes!
Monsters can be enhanced with a wide range of powerful Skills allowing Duelists to customize their builds.
Setting different Skills to the same monster results in wildly different battle styles!
Use your favorite monsters and Ace Monsters to create your own unique Deck!

▼ Key Points for Beginners
Building off of previous entries in the Yu-Gi-Oh! series the new-and-improved Duel system is completely intuitive!
With simple controls and rules even people who have never played a Yu-Gi-Oh! game will be Dueling in no time!
Deck building just got easier! With the Auto-Create feature the game will fill in the gaps between your favorite monsters!
In 4 Player Matches you'll be paired with players of a similar level so new Duelists can breathe easy!

▼ Key Points for Yu-Gi-Oh! Fans
Characters from the anime series act as your Partners offering advice and even stepping in to help you in battle!
Duel together with your favorite characters in a whole new experience!
With four players in action at once there are new possibilities for chaotic yet tactical Dueling either in a free-for-all or while working in tandem.
Set Skills to your monsters for limitless strategies! Choose your favorites and build a Deck that capitalizes on Ace Monsters' strengths!

[About the Yu-Gi-Oh! Series]
Yu-Gi-Oh! is a popular manga created by Kazuki Takahashi that has been serialized in SHUEISHA Inc.'s WEEKLY SHONEN JUMP since 1996. Konami Digital Entertainment Co. Ltd. provides a Trading Card Game (TCG) and console games based on the Yu-Gi-Oh! anime series (which follows the original manga) that are enjoyed by fans worldwide.

[Required Device Specifications]
Operating System: Android 6.0 or higher
Recommended Device: Snapdragon 845 or higher 4 GB or more RAM
Please note that even if your device meets the specifications required to run the application other factors may prevent its operation (available memory conflicts with other applications hardware limitations etc.).

[Other]
This game facilitates the purchase of in-game currency which is used to obtain randomly generated items.
Show More >

Board and Card Games + online