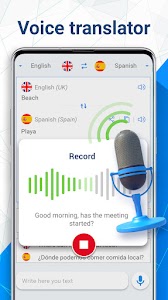 Language translator with dictionary voice recognition and more than 120 languages

Talkao Translate – Voice Translator can translate voice and text. you can use the voice recognition system and listen to your translation too. Talkao's translation engine has word suggestions and spell check English Spanish dictionary and many more.

Learn languages quickly and easily speak to translate the written or spoken text and phrases of your choice. Keep the translation history and save the translated phrases you prefer in favorites. Share the audio or text of the translation over social networks. It is the most complete text translator with dictionary proverbs and verbs that will help you speak and listen without problems.

TRANSLATOR:
Enjoy the most advanced translation engine with dictionary definitions and synonyms. Translating languages and hearing their pronunciation is at your fingertips. You can share the text and audio of the translation. Use the dictionary with definitions to learn languages. Translate voice is a reality thanks to voice recognition. Hear the translation including accents from different countries.

SMART-BUBBLES:
Translate languages is much more than showing the text or the translated word use Smart-Bubbles to get the extra information of a word to know its meaning and be able to translate words exactly. Translate verbs and conjugate verbs with the function conjugate verbs proverbs translator dictionary and idioms verified by human translators. The best language dictionary for you.

TALK:
Communication between people without language barriers. Use your mobile device and have a translated conversation. The best voice translator along with translated audios with different accents. Ideal for trips and for people who like to travel and learn languages.

CONNECT:
Translated calls are here! and talk to people from all over the world regardless of their country of origin. Call your friend and communicate with them with audio and translated voice output. No more language barriers. Speaking and automatically translating so that the other person hears your translated call is a reality.

BOOKS:
Concerned about the accuracy of the translations? Talkao Translate presents the most accurate human translator-reviewed dictionary on the market. Learning languages and their peculiarities is easy and fast. Set phrases proverbs vocabulary technical language and much more.

Thanks for using Talkao Translate! We publish updates regularly on Google Play with speed user experience and reliability improvements to keep our app as good as always.
Show More >