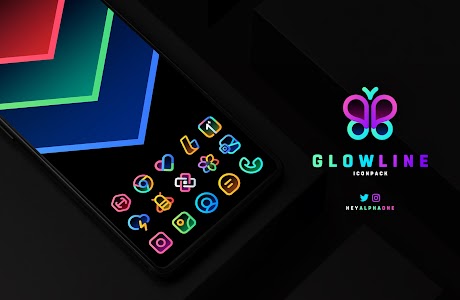 GlowLine Icons made of colorful linear linese with beautiful glow inside. and its extremly beautiful and eye-catching for both dark and Light setups. and it looks extra amazing on dark and Amoled homescreen.

One of the easiest ways to breathe in new life in your phone's interface is by giving it a new look with amazing iconpack. There are already thousands of iconpacks on market. But GlowLine is totally awesomeglowy and beautiful icon pack for Android.

GlowLine is a very Minimal colorful Lineal icon pack that comes along with 2100+ icons and tons of cloud-based wallpapers on deck. In this Iconpack We are taking Google' Material Design as a primary guideline for the size and dimentions and applying our own creative touch! Every icon is a real masterpiece and crafted with lots of time and attention to smallest details.

GlowLine Icon pack is still new with 2100+ Icons . And I can assure you to add lot more icons in every update.

Still Thinking?
Undoubtedly GlowLine Icon Pack is very attractive and unique. and we do offer a 100% refund in case you didn't like it.

DISCLAIMER
• A supported launcher is required to use this icon pack!
• FAQ section inside the app which answers a lot of questions you may have. Please read it before you emailing your question.

This icon pack has been tested and it works with these launchers. However it may also work with others too. In case you do not found an apply section in dashboard. You can apply icon pack from a theme setting.

Extra Notes
• Icon pack needs a launcher in order to work. (Few device support iconpack with their stock launcher like Oxygen OS Mi Poco etc)
• Google Now Launcher and ONE UI do not support any icon packs.
• Missing an Icon? Feel free to send icon request from request section in the app. I will try my best to cover it in a next updates.