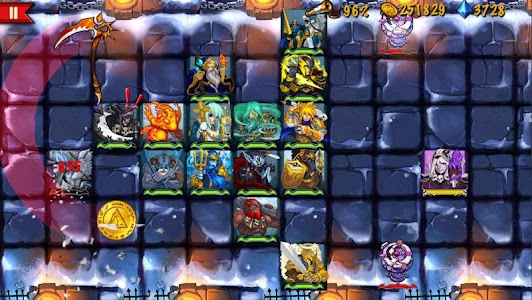 Strategy Legion is a Turn-Based Strategy RPG designed by WWG Indie game.
It is a small size TBS game only 10M but don't get deceived by its size it has included all elements that a SRPG game is expected to have.
This game tells a epic story of King Arthur and Knights of the Round Table include lengendary heroes:Merlin Lancelot and Guinevere in game all the enemies can be recruited
Use range skills tactics to destroy your enemy. Through challenging more than 400 levels to accumulate gems; upgrade and equip your army to beat enemy.
It is a free strategy game with No Ads.
If you are interested in turn-based strategy gamesSLG gamesSimulation games4X gamesstrategy board gamesyou may like this game.

- Fun and abundant game contents:
Over 70 kinds of heroes can be hired.
Create your own party with a combination of 24 unique knights.
You can also enjoy it as a roguelike style RPG.
Many original characters and legendary heroes.

- Super fierce battle:
Think well about compatibility with enemies organize an advantageous team.
Easy operation move and attack the character.
Turn-based combat.
Practice the strategy move the character aim for the annihilation of the enemy.
Rogue-like turn-based strategy game fused with RPG. A rectangular battlefield will be the stage.
Let's challenge a full-scale strategy battle!
Exciting battle win over from the battlefield!

- Collect hero and Train:
There are many training elements such as level skill weapons and equipment items etc.Foster the heroes and win the battle.
Collect six heroes of legendary quality to unlock the gods' weapon.

If you like the following games you surely like this game: turn-based gameswar strategy gamescharacter gathering gamesRPGSRPGTRPGWar chess etc.
Also If you are interested in hex strategy gamesRGP games like Advanced Warmagic tower and Civilizationyou may like this game.
The new expansion pack is developing will add new Map new Units(musketeer gem thief necromancer ...) Roguelike dungeons exploration and tower defense gameplay.
Show More >