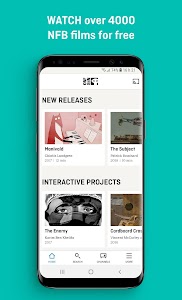 Watch over 4000 films from Canada’s National Film Board - documentaries animations and feature films - free on your device.
You can download films on your device to watch them offline (for up to 48 hours).

FEATURES:
* CHROMECAST support allowing you to stream films to television
* WATCH over 4000 NFB films for free
* Download films to WATCH OFFLINE (Store films for up to 48 hours)
* Add films to your FAVOURITES
* SEARCH the prestigious NFB film collection
* Browse films by thematic CHANNELS
* KIDS' channel with fun and educational content for children
* SHARE your discoveries with your friends by email on Twitter or Facebook

The NFB Films app requires Android 4.1 and above.

Please send your feedback by email to [email protected] or by Twitter to http://twitter.com/TheNFB.

The National Film Board is Canada's public film producer and distributor. Find out more at http://www.nfb.ca/
Show More >

India Fm Radio - All In one