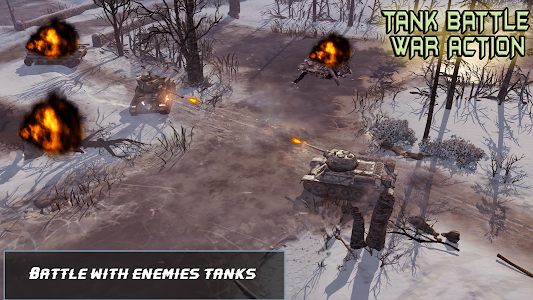 Get ready for a devastating tank battle against the army tanks. Tank Battle War Action is a tank attack war 3d game where you defend yourself against the enemy war tanks. It’s time to show your skills in the battle field against army tanks in this tank warfare battle. The last resort of the survival mission is you. Fight the defence battle & lead the troops in your steel gunner army tank against the deadly enemy attacks. The opposition is equipped with dangerous and heavy gunner machinery.
Get ready to fight the ultimate army tank combat as you play the role of an army soldier in this Tank Battle War Action Game. In this Free Tank Battle War Action Game you have to operate your tank to navigate through enemies headquarters as the enemy have taken over the control with their gunner tanks panzer gunship helicopters and armed forces. Your last resort is the ability to fight back with the heavily armed army steel tanks with guided missiles targeting and much more. Complete all warfare missions to gain the control of the city back and destroy the enemy for good. Blackout the enemy with your missile attacks and destroy their army of tanks.

Your mission is to reach a specific destination by destroying all enemy valuable assets including tanks coming along the way. Survive on yourself a tough deadly Tank Battle War Action. Try to avoid sighting shooting and show your skills challenge your strategic thinking. When continuation gets tough when you use the best simulation artillery tactics you are using.

Enjoy Free Tank Battle War Action and please write us back with suggestions on how we can improve the game.
Show More >