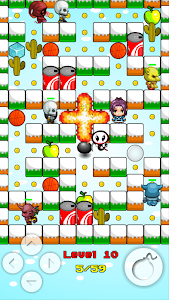 If you're a fan of arcade machines this is your game. A game full of action enemies and strategy.
Full of dangers and pure adrenaline. Bomb Mania is a classic bomberman game but highly improved.

Tremendous music and great speed of game accompanies each of the different worlds: Prairies Snow Desert Future and Mountain.

In each level bomber man will gain experience to be able to enter the next level until you are an expert bomber. There will come a time in which you will have to dodge at full speed to the different enemies when they place the bombs and you must take every opportunity to knock them down to them.

With somewhat retro graphics visually appealing and with a chiptune music you'll have to prove to yourself that you're able to control your reflexes and your mental ability to the purest style 80s and 90s. Place traps destroy monsters and knock down walls !!!

Put bombs and you can eliminate the monks ogres skulls demons vampires warriors and other creatures that will do everything possible to destroy you. Keep in mind that they can also put them near you and try to corner you at all costs.

You can choose a hero boy or girl; To be the one to free the battle against the henchmen and to recover all the lost coins of the kingdom.

Get items that make the job easier although there are some that will leave you a little frozen.

There will be objects that will increase your speed others that will reduce it and some more like the hearts that will fill your energy bar or bubbles that will provide you with a shield of invisibility for a while.

Enjoy the usual games and jump into the adventure you've been waiting for. Bomber Mania is going to love you.

Remember: Collect all the coins that will be distributed in the maze and only then you will go to the next level and try to overcome it by getting as many stars as possible.
Show More >