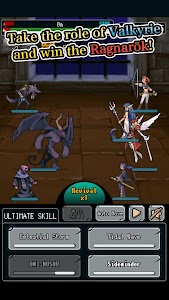 Take the role of the battling maiden Valkyrie and find fellow warrior for the Ragnarök battle!
There is no limit on the warriors you can find! Dungeon loot is also unlimited!
War Of Valkyrie is an RPG chock-full of special game modes.

-- Story --
The Ragnarök started everything.
Valkyrie is bestowed powers that draw fellow warriors to aid her in Ragnarök. She descends to the human realm to find warrior spirits...

-- Unlimited warriors to find! --
Warriors’ attributes are generated randomly.
These range from basic parameters like attack to classes skills alertness and more.

-- Battles are easy to control but deep! --
Battles are generally played out automatically -- but you get to control the layout of your troops send emergency recovery orders and launch your Ultimate Skill.

-- Tons of hack-n-slash gameplay! --
The properties of equipment you find on your adventures are randomized.
They might contain special effects or be combinable too!

--- Send your trained warriors to Valhalla! --
Befriend warriors and train them to be strong.
By sending them to Valhalla they can fight with you in the Ragnarök.
Send strong warriors and Odin will be pleased. If they’re weak he may be angered...