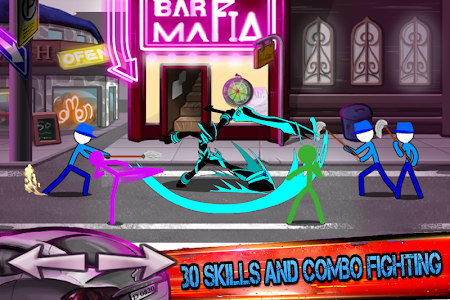 ➣ Sticker Fighting Ultra is the greatest RPG action game 2018's.
The spectacular return this is combination of kungfu boxing fighting gameswrestling and shooting games.
Diverse characters like ninja sticker Archer Shooter and Knight fight to defend the city from robbers.
In the fighting games you will have to face against many zombies and werewolves monsters and mighty killer.
But don't worry this is a opportunity to show off kungfu skill and and your shooting skill.
This is a 100% free game are you ready to become the kungfu master in this stick game?
➣ In each adventure battle you will be armed with advanced weapons: a swords sniper armor and encounter many BOSS have tremendous power.
You needs fight off the ninja and dangerous zombies. Fight hard to defeat zombies and avoid getting killed.
The levels attack defense & hp are really important you will be able to make your ninja stronger by the equipment in the shop.

➣ Download Sticker Fighting Ultra and connect with others right away. Get it on ChPlay.
Show More >