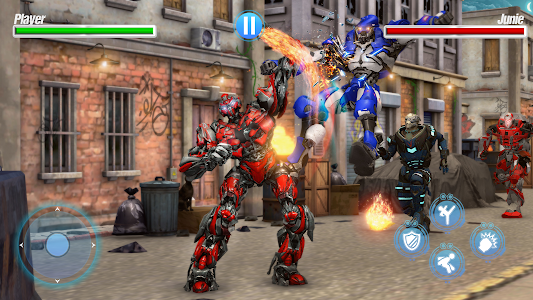 Looking for robot fighting games with epic robot kicks smash and punch demolition? Look no further as you have found the ultimate fighting action game!

Embark on the ultimate action journey of robot fighting games as you destroy the gang of evil roster of powerful battle hungry and larger than life forged robot fighters! Clean the streets of kungfu fighter robots with best kung fu robot wrestling in a free-to-play game.

Kick punch and smash down the gangster clan of sentient brawler robots unleash unique and devastating moves upgrade and level up your mean machines and reign supreme as a grand god of steel in the battle arenas!

The game is completely free to play but some in-game items require an in-app payment. You can turn off the payment feature by disabling in-app purchases on your device.

Unleash the demolition fury as you rip through the champions of robot games enter the ultimate fighting street contest! Use your robot games hero to fight and brawl against grand extreme boss and bang him out of the battle arena.

In this robot fighting games you will have a basic player which will turn into a super robot that can fight its way through the waves super robot attacks and finally kill the super robot boss in a direct melee combat with a variety of combos such as kick punch flying kick robot punch along with power ups such as health guns swords fireballs and much more.

In the category of robot action games this is a fun addictive action packed fighting on streets of new york.