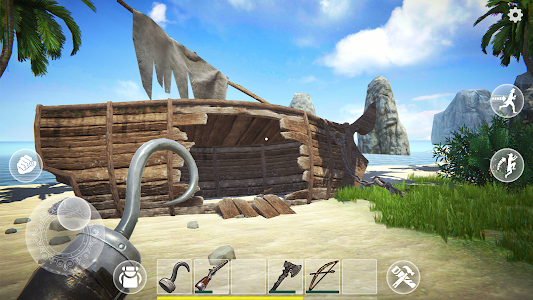 Welcome to the most advanced free Pirate Survival simulator!

Your ship is wrecked. Crew of 7 members fall out and get lost.
You are the only one who survives. It can be your last day or a quest to become legends.

Now you need to fight and survive on a deserted island surrounded by a reef.

Set fire. Clean your sword from rust. Build a raft and craft your island camp. It's a basis for survival.
Your shelter will serve you as an ark protecting you from dead zombies and skeletons from afterlife.

Wars with afterlife creatures can be very dangerous and arduous - use your sword and kill your enemies like godzilla with a mordhau or murder-stroke.

Many days gone now you are a skillful survivor. New challenge is to explore the island like a nomad: 1 conquer the highest apex; 2. hunt a wild wolf 3. sail by raft; 4. find old weapons with rust in an abandoned village; 5. fight with godzilla.
But be aware of reef - it can be dangerous and full of sharks. Survival is your goal!

Evolve as pirate and search for treasures hidden on the apex of vast island using sea atlas. Be a smart thief because treasure chests are guarded by zombies and godzilla appearing in the dying light and ready to attack your with their rusty knives.

Night comes - be careful. A new challenge for survival. Evil from afterlife waits for you in the dying light: sea is full of kraken and sharks in a forest you can run into a wild wolf descending from apex or a zombie from afterlife your ark can be attacked by a bear or godzilla. Watch out!

Prolong your survival for 100 days and more pretend you are a skillful thief or a furious nomad or a last pirate on island in the dying light.

This free multiplayer game is currently in Beta.
But we did our best to optimize it for fast performance.
While keeping probably the best Graphics available for mobile multiplayer.
The best survival multiplayer ever.

What’s NEW in previous update 0.373:
• Increase the stability of the application
• Fixed bugs blocking the attack of skeletons at night
• Fixed bug blocking the display of navigation tokens
• Increased minimum Google OS version, now - 5.0 ‘Lollipop’.
This was a necessary measure, since it became practically impossible to maintain high-quality support for the versions below.

New update is in the works already!
Love ^_^
Show More >