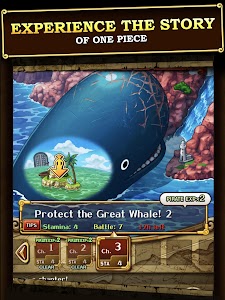 With over 100 Million+ downloads to date One Piece Treasure Cruise is an epic pirate anime RPG game based off the popular One Piece world! Featuring classic turn-based RPG battle mechanics mixed with an intuitive tap battle system the pirate action never stops in this anime adventure game! Relive your favorite moments from the original One Piece storyline as you take Luffy and his crew of Strawhat Pirates on an RPG adventure to find the One Piece treasure!

RELIVE THE ONE PIECE ANIME STORYLINE
• Explore the epic original anime story from the beginning
• Join Luffy and the Straw Hat pirates on an RPG adventure to find the One Piece treasure!
• The unpredictable and diverse World of One Piece is now yours to explore!

RECRUIT AND TRAIN YOUR PIRATE CREW
• Select from over 2000 of your favorite One Piece anime characters
• Level up by evolving and limit breaking your characters!
• Assemble the most powerful pirate crew!

Are you ready to set sail on an adventure into the anime world of One Piece? Join Luffy and his misfit pirate crew and experience the One Piece Treasure Cruise anime RPG game today!

By downloading or installing this app you agree to the BANDAI NAMCO Entertainment Terms of Service.

Note:
This game contains some items available for in-app purchase that can enhance gameplay and speed up your progress. In-app purchases can be disabled in your device settings see
https://support.google.com/googleplay/answer/1626831?hl=en for more details.

This application is distributed under the official rights from the license holder.

Powered by "CRIWARE".CRIWARE is a trademark of CRI Middleware Co. Ltd.
Show More >