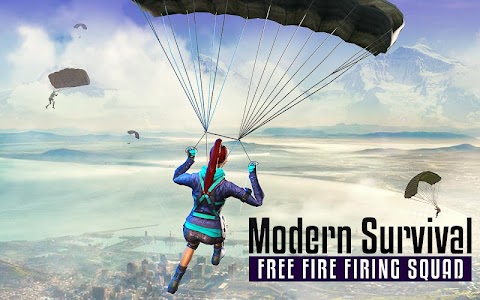 Modern Survival Free Fire: Firing Squad is the Ultimate Survival Shooter Game Available on Mobile.Immerse yourself in intense firefights using both Sniper rifles and assault guns across unique 3D environments. Locate and eliminate hidden targets and fire your dynamic guns with the help of various flying machines. Destroy smash & wipe out everything that comes your way to be a real-time shooter. Each 10-minute game places you on a remote island where you are pit against 49 other players all seeking survival. Players freely choose their starting point with their parachute and aim to stay in the safe zone for as long as possible. Drive vehicles to explore the vast map hide in trenches or become invisible by prone under grass. Ambush snipe survive there is only one goal: to survive and become the apex of them all.This intense action shooting gameplay of modern world war Firing Squad Battleground lets players of firing squad parachute onto an island in a survival game loot and scavenge weapons supplies and other survival war equipment for ultimate survival in shooting battleground games. The squad shooter in shooting battleground has to win this Last Survival Game. Defeat your rivals in epic firing and shooting games and get ready to explore the battleground land loot survive craft shoot and do whatever it takes to survive in Modern Survival Free Fire: Firing Squad.