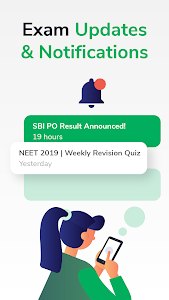 Gradeup is a FREE Exam Preparation App and helps you prepare for various competitive exams like:

Gradeup app helps you prepare in Hindi and English. You can get all your daily notes and quizzes bilingually just like your actual exam