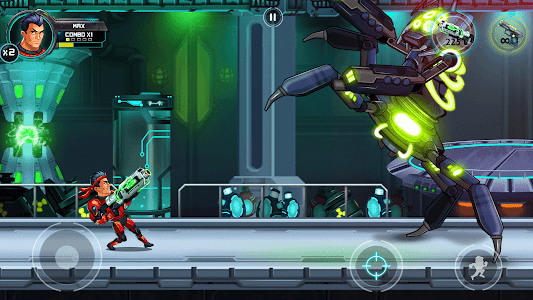 Welcome to the future metal soldier!

Our Hero Max is back the long-awaited sequel of Alpha guns is here with a lot more exciting levels including various types of enemies and strong bosses. Be careful though the enemies and bosses have got some serious new equipment.

In this metal shooting game the enemies and bosses are all around and you are an alpha soldier who has to protect everyone from this major mayhem!

What is Alpha Guns 2 all about?
Alpha Guns 2 comes among the top platform shooting games where you are a metal soldier named Max who has to save the Earth from extinction! And how will you do that? By using machine guns enemy chaser wide guns and so much more!

You will deal with different armed enemies in this metal shooting game so shoot them down before they come close to you with your heavy machine guns wide guns and much more! Remember one thing alpha soldier pick up guns on your way to get additional ammo!

This metal shooter game has an action-packed world war gameplay which is easy to learn but tough to master!

Try to compete with other players on the leaderboard and with achievements to show everyone who is the best.

Be a hero and save the world in Alpha Guns 2 where you can jump and shoot all the various enemies like tanks drones powerful bosses sentries and much more. They have many weapons which they can use such as shotguns grenades rocket launchers laser guns and other dangerous weapons.

With original missions to explore and many achievements to complete you will always have a new challenge waiting for you. The game is very easy to play and is completely FREE! It can also be played offline when necessary. With great music and sound effects the game will surely be a lot of fun to play.

One of the best action games for Android with metal slugs!

Download this metal shooter game and put an end to this major mayhem happening around!

Contact us on [email protected] if you need any help!
Show More >