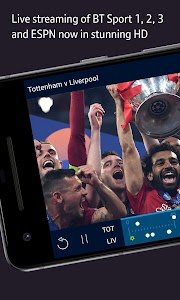 Key features of the app:

· A valid BT Sport subscription and BT ID are needed to access live content on the BT Sport app
· Mobile network and wifi charges may apply
· It is possible to install and access the app on as many devices as you like but users are restricted to two concurrent video streams per BT ID
· All video is only available within the European Union - in order to stream video you will have to turn on location services. No data is passed to BT.
Show More >