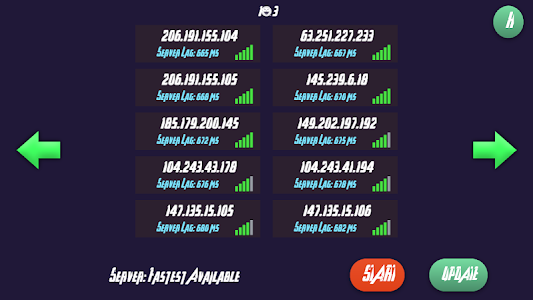 Venom.io is an addictive new mobile game that combines the classic game of snake with elements. In this game you are a snake instead of a blob and the goal is become the biggest and longest worm in the game.
To defeat others get in front of any worm so his head touch your tail.
A single mistake is enough to make a giant worm turn into nothing and lead to the game over even against the smallest worm granting this latter a chance of becoming stronger fast without effort. Focus on the light dots along the way forget about the others except when you’ve got enough length to trap them in circles. Note that it’s possible to cross ways with your own body without punishments.
You are a little Worm other slither worms are crawling around looking for food to eat to get longer too.
If your worm head touches another worms' body you will explode and it's game over.
But if you get other snakes run into your tail then they will explode and you can eat their light dots to grow fast!
So you have a fighting chance even if you're a little serpent!
Be sneaky in front of larger serpents to defeat them!
Slither around with your little snake to become big!

Train your skills and try to survive as much as you can and try to become the biggest of all snakes that crawl around you. In the beginning you start as a small worm and your goal is to get bigger fast by eating dead snakes mass. How long can you survive? Can you become the biggest slithering snake?
Sneak in front of others to kill them. Don't worry about your snake size.
Venom.io has no lag issues or performance problems and also have touch controls designed for every mobile device.

Eating agars will make you longer and bigger. Avoid hitting other snakes with your head.
Make the enemies run into your tail to kill them. This way you can kill a worm which is bigger than you.
Eating their remains gives you extra length fast and higher scores.
Develop your skills and try to survive as much as you can.

[HOW TO PLAY]
- Eat little dots and agar to grow this is the main goal in Venom.io.
- Make the enemies run into your tail by encircle them.
- You can Eject mass to get extra speed with the speed button on the right-side bottom.
- Try to get around enemies and become the biggest worm possible.

Venom.io is a fully skill based adventure slither game ever. Sneak and get sneaky become the biggest glow worm eat light dots and keep your worm alive as long as you can. Now you can play the game even if you are offline or in multiplayer mode when you are connected to the internet.

Game Features:
★ No Lag. No performance issues on any device.
★ Play offline in single player against bot worms when offline or Multiplayer online with other players.
★ Fully optimized game-play with an on-screen joystick to control your slithering.
★ Strategic alpha online multiplayer game-play mode.
★ Easy to learn intuitive touch screen controls.

Game Rules Are Very Simple:
★ Eat dead crawl glow light dots to grow and stay alive as long as you can.
★ Don't run into other snake or the map edges you can run only into your own body tail.
★ Avoid the map margins or you will explode.
★ Slide in front of other snakes to kill them and finally eat their light dots.
★ Tap the eject mass button for the high speed boost when you need some extra speed.

Game is still in development. Your reviews are important for us!
Please send us any feedback. We will take them serious.
If you find any bugs or have problems installing the game please contact us at [email protected]
Show More >