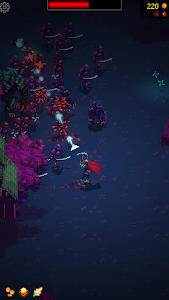 "An action roguelike that you have to play right now" 4.5/5 - Pocket Gamer

Immortal Rogue is a hack and slash roguelike hybrid where you play as an eternal vampire. You wake up every 100 years to feed and who you choose to hunt directly impacts the future. Different timelines offer different enemies to defeat and unique items to discover. You can fight samurai with a rocket fist from a long lost civilization or take out cyborgs with an enchanted katana.

The combat is brutal and defeat has consequences. But you can never truly die. The world goes on with both your allies and your enemies awaiting your return.

Key Features:
-A dynamically generated world based on your narrative choices.
-Challenging skill-based combat with mobile-friendly controls.
-Over 70 unique enemies to discover
-Colorful retro-styled pixel art.
-30+ Vampiric abilities to unlock
-30+ Unique weapons to master
-Secret bosses to discover.
-Hundreds of potential characters to hunt down or turn into allies
-Massive replayability with scores of possible timelines that offer their own distinct characters challenges and rewards.
Show More >