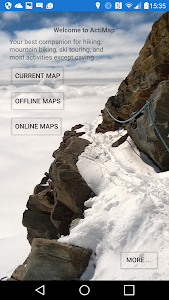 Designed for use in the great outdoors as a GPS and navigation aid ActiMap is your best companion for outdoor and backcountry activities such as hiking cycling mountain biking ski touring and most things except caving...

With a focus on selected National topographic maps which are not based on OpenStreetMap data the online map sources library currently includes those for Austria Belgium Canada France Germany Great Britain Italy New Zealand Norway Spain and the United States. These include:

You will also find World satellite imagery. This library will be updated regularly and you can start importing straight away. Be sure to keep coming back!

Regions of maps can be downloaded for use offline and you can record and display tracks of your journeys.

Look at these other features:

Note: When purchasing ActiMap you are only purchasing the functionality the app provides and not a license to use the mapping data. The usage and licensing rights of the maps (and potentially of downloaded GPX tracks) you access are the property of their providers and you are kindly asked to honour them. All online maps in the starter library and the ActiMap online library are also publicly accessible online for free via their respective websites.

(*) Bing Maps while publicly accessible at bing.com/maps requires a key for access within an app such as ActiMap. The embedded ActiMap key is a basic limited-use key. As such permanent on-going free access to Bing Maps is not guaranteed and will be reviewed based on usage.

-
@Nocna Furia
1.8.1.2
~ Fixed an issue whereby the app could fail to launch in some languages or localizations