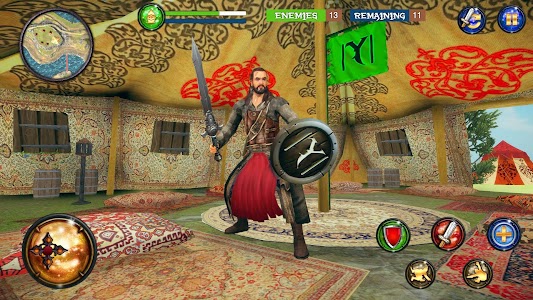 As a warrior your duty is take ride on horse & start mission by showing archery shooting skill. In Ottoman Empire make strategy under the command of Ertugrulbey with sultan army against enemies. Kill every enemy on the way & be a real hero of Ertugrul ghazi war 2020. Enjoy number of levels with multiple missions in kai Kabila. Fight with enemies on the spot & win the battle to occupy the realistic stronghold of enemies in Ertugrul Ghazi: Rise of Ottoman Empire Games. Start mission & become the Ottoman capital powerful man under the power of Osman.

Wait is over so download Ertugrul Ghazi 2020: Ottoman Empire War Games in your devices. Because as a super warrior you one best fighter in Ertugrul Ghazi sword fighting game 2020. Use sharpest sword fighting skill best archery shooting to win the game. Number of levels with multiple missions. Keep eye on power. Your enemies are clever try to hit & kill in short time. But use mind tricks to use knife on the horse. Before starting each mission draw a plan for destroying the enemy’s houses because they are training their men for fighting in Ertugrul Ghazi: War of Ottoman Empires. Now enjoy sword fighting with your friends but don't forget rate us! Your Feedback & Review Important for Creating more challenging levels.