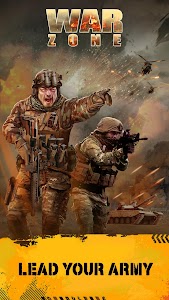 BUILD YOUR MILITARY STRATEGY AND JOIN THIS WORLD WAR TO RISE AS A CONQUEROR IN ONE OF THE BEST STRATEGY GAMES!

Command army navy & airforce. Grow your empire join your war friends and wage epic wars on enemies! Use your strategy & tactics to outsmart and destroy them. Become a world conqueror in this free strategy-games.

⚔️ Missions - Battle against the evil forces of STORM who are trying to take over the world.
⚔️ Assignments - Complete Assignments to rank up your Captains and command more Units into battles.
⚔️ Special Ops - Destroy enemy forces and earn huge loot in Special Operations.
⚔️ PvP Battles - Wage epic battles against other players loot resource mines and attack STORM outposts in Battleground. Show off your military power to the world.
⚔️ Captains - Recruit Captains from all disciplines to command massive military into epic wars.
⚔️ Mercenaries - Hire war heroes mercenaries to assist the military in pvp battles.
⚔️ Military Units - Deploy and command massive military forces into this war zone. Choose strategically from a variety of modern army navy air force and missile units.
⚔️ Base Operations - Build and upgrade your base to level up all units defenses and economy.
⚔️ Defense - Deploy defenses to protect your base from pvp attacks.
⚔️ Hospital - Heal your units and be ready for war at all times in this warzone game.
⚔️ Bank - Safeguard your loot in the bank and invest into growing your military edge over others.
⚔️ Missiles - Deploy missiles to take down defense and wage a strategic war.
⚔️ Income Properties - Manage your economy and upkeep by buying various income properties.
⚔️ Military Drills - Perform drills and keep your units at maximum stats to dominate the action in war zone.
⚔️ Skills - Improve your war strategy with allocating skill points tactfully.
⚔️ Revenge & Strike List - Take revenge on your enemy. If you are finding it difficult order a strike against them in this free military games.
⚔️ Alliances - Choose your war allies to help in your journey to conquer the world.
⚔️ 🏆 Leaderboards - Show the world your power and supremacy by competing on live leaderboards in one of the top strategy-games.


A new strategy game to dominate all strategy-games! Experience the power to loot & destroy your enemies in WARZONE the best of free strategy games!

- Activate all new boosts and progress faster to domination!
- Get free deals to fund your war!
- Bug fixes