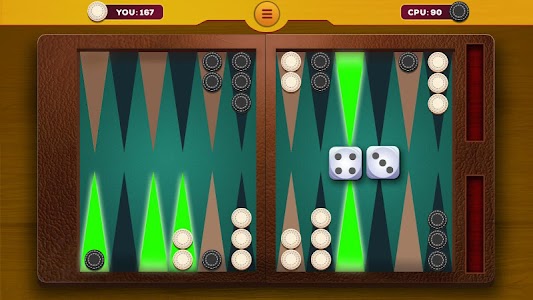 🎲🎲Backgammon Classic is a game of skill and strategy one of the world's classic parlour board games played for recreation and gambling. Like Mahjong Backgammon is played in social groups in coffee houses and bars. Historically variants of this game are believed to have originated in Egypt over 3000 years ago from where it was adopted by the Romans and then later travelled to India. It also spread to East Asia but was largely replaced by Xiangqi (Chinese chess). It is now very popular in the West.

Play the best free backgammon classic free game with Backgammon offline Roll the dice in this classic dice & table game for 2 players and test your skills against your friends.🎲🎲

🎲 Key Features 🎲
🎲Train against the computer with adjustable difficulty
🎲Free-to-play without limitations
🎲Casual Backgammon with no money involved! No bets!
🎲Play online against opponents from all over the world
🎲Challenge your friends and family on the same device