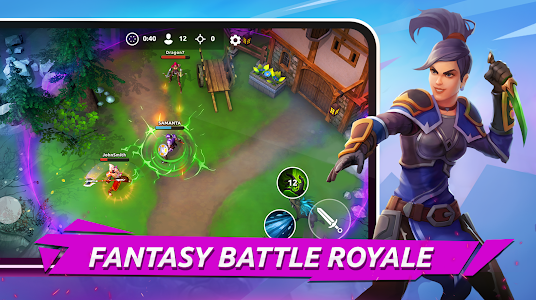 Magical fog descended on the once-quiet lands and only the best of the best will be able to escape and stay alive.

Mobile legend
The battle royale genre has already become legendary and gather millions of fans including on mobile devices. We collected the best from moba games (MOBA - a multiplayer online battle arena) added an RPG component and served everything in a delicious sauce of fantasy atmosphere.

Fast pvp battles and survival
Ready for the challenge? Join fast and dynamic battles that unfold in the arena with 30 players in action battles. Get equipment track down or hide from the players but most importantly - survive until the very end otherwise you will become only part of the deadly fog.

The Middle Ages in all its glory
Bows swords spears and other weapons of the most exciting era - what else is needed for complete immersion? Oh yes magic! As well as potions that will help you survive; various monsters and creatures that stand in your way; and of course the fog that brings destruction.

Well ready? See you at FOG!

Attention: the game is at the stage of open beta testing and is actively developing!
Show More >