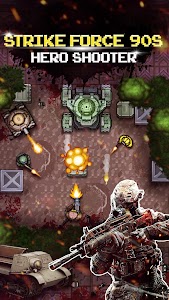 Top popular arcade shooters must try. Grab your gun and Shoot 'em up to become a hero in the new war machines game.

Strike Force 90s : Hero Shooter - War Machines - Best game in the old style from the 90s has been perfectly remade for smartphones. Are you a fan of the strike force game genre who like war strategy such as: war games military games? If the answer is "yes" then this game will suit you best! As it comes among the best battle games in arcade shooters on Android!

Play the ultimate arcade shooter while you survive from war games. Get ready to be in the military and fight off the bloody bosses (tanks machine enemy..) in this epic arcade shooter.

- Special modes: Ghost Double and Freeze Radiation Invincible Nuke each of them radically changing the gameplays.

- Unique challenges with epic and huge bosses: battle and defeat 13 kinds of powerful bosses and wipe out swarms of their henchmans.

- Retro modernized: pixel graphics and blood - pumping music will make you return to your childhoods where classic games that will never age.

- Very easy to play and also can satisfy gamer who likes military games.

- Touch the screen to move and destroy all enemies and bosses in war games by using guns bomb squad cyborg and robot. ( The gameplays will be slightly different games: tank war battleship soldier games or tank star But it is no less attractive )

- Collect items to upgrade or change your weapons to win in this war machine.

Get ready for the fight of your life in this new war machines game.

You wish that you could apply your war strategy between the strike force war world of tanks bombers and machines to victory?

Now it will be possible in this game. We provide you plenty of guns and lots of deadly BOSS to fight with in this game of war.

Having any problems? Any suggestions? We would love to hear from you! You can reach us at support at [email protected]

PLEASE NOTE! Strike Force is completely free to play but you can purchase in game items with real money.
Show More >