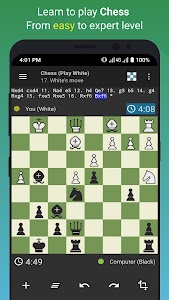 ♞ Chess is a two player strategy board game played on a board. This is one of the most popular games around the world with millions of players in homes clubs or in tournaments.
♞ Chess not only give you a few minutes to relax but it helps you exercise the brain's ability to help players to develop tactical ability thinking memory ☺️. Play and learn with classic board games for free & offline.
♞ Chess is suitable for all ages from beginners or professional competitions. You can play anytime anywhere and don't require a network connection.
Chess is played on a checkered board with 64 squares arranged in an 8×8 grid. Each player begins with 16 pieces: 1 king 1 queen 2 rooks 2 knights 2 bishops and 8 pawns. Each of the six piece types moves differently with the most powerful being the queen and the least powerful the pawn. The white player always move first. The objective is to kill the opponent’s king by placing it under an inescapable threat of capture. This is called checkmate.
The game can be won by voluntary resignation of the opponent which typically occurs when too much chess pieces is lost. There are also a few ways that a game can end in a draw.
Chess is not a game of chance it is based on tactics and strategy helping the player can practice the thinking and creativity.
How to move the chess pieces?

♙ Pawn: Move one square forward or two square at the first move. Pawns can capture one square diagonally in front of them.
♜ Rook: Move to any position horizontally or vertically.
♝ Bishop: Move diagonally to the square of the same color.
♞ Knight: There are 2 knights for each player on the chessboard between the rook and bishop. It moves in the L shape.
♛ Queen: Can be moved to any position on the chessboard of horizontal vertical or diagonal.
♚ King: Move one space in any direction and never move in to check.
When capturing an opponent's piece the attacking piece 🎯 will move to that square and the captured piece will be removed from the chessboard.
If the king is in check the player needs to move to get out of check. If not the king is checkmated & the player loses.
Features
✔️ Many powerful chess engine with many difficulty levels.
✔️ Easily track and analyze the game by the moves table.
✔️ Allow undo & redo if make a mistake move
✔️ 10+ themes for chess boards pieces.
✔️ Automatically save the previous game.
✔️ Share the game in pgn format.
✔️ Classic board game under 9Mb.
✔️ Many levels of difficulty to play suitable for kids adults children… and free.
✔️ Play with friends or play against the computer.
✔️ Play offline and play for free.
Do you like the game ♞ Chess without ads? Download ⬇️ the game and buy remove ads. We are always developing the game more and more attractive features.
If you love this game please rate it 5 🌟🌟🌟🌟🌟.
Thank you for playing ♞ Chess. Good luck and have fun.
Show More >