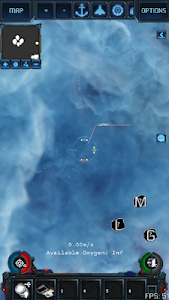 THE GAME IS ONLY ACCESSIBLE TO THOSE WHO HAVE DONATED AT LEAST $20 FOR NOW. This is necessary to keep the number of players low while we test the game and prepare the servers to scale up to more users. One day we hope to make the game entirely free to play! See our website for details on how to become a donor.

The next gen space survival MMORPG. Be part of a real open world society.

Voidspace – the next evolution of survival mmorpg.
Modeling the human experience in a society. This space MMORPG isn't just about you and your journey it's a about how all players progress technology society and infrastructure in a virtual environment together.

🌌 TWITCH-BASED GAMEPLAY
Voidspace aims to finally bring a seamless open world space MMO multiplayer experience. No "zones" or seams of any kind just one enormous game world; everyone is playing together in the same server. Discover other player outposts and possibly join another group in order to maintain your own security. Find ancient abandoned player-made civilizations that you can research and study acquire or disassemble and recycle that was once created and populated by real players.

🌌 INVENTION AND CRAFTING SHAPES THE WORLD
Players create the sci fi game world through the natural progression of technology and society. This means the game world will change significantly over time. Players will gain control over areas of space and will benefit from keeping those areas policed and safe for people to conduct their business.

🌌 GET AN IDEA AND PROTOTOYPE IT TO MAKE IT A SKILL
New ideas come to a character automatically but they can be focused and accelerated through the use of a research facility or lab. Invent weapons special equipment with special abilities base modules ships and ammunition. Sell manufactured versions of your invention or sell the ability to create them to other players.

Become a scholar of a category of technology in order to boost the quality of your inventions within the same category. The spread of ideas skill and knowledge will be a very valuable concept within the game. It is very likely that players will create schools to educate and spread knowledge for money. Well established player groups may even provide education free-of-charge to new players in order to give their player-base an advantage in the world.

🌌 MINE ASTEROIDS FOR RAW MATERIALS
Start with a makeshift pickaxe that you made from scraps advance your mining technology until you have full mining rigs capable of mining for you while you're offline.

🌌 COLLECT AND STORE FUEL
You will need lots of rocket fuel for your expeditions. Either collect gas from gas clouds or make rocket fuel with a bit of chemistry.

🌌 GROW CROPS FOR FOOD
In order for your character to perform their best they'll need to eat and eat well. A scientist can't work on an empty stomach a well fed scientist can reach his maximum potential.

🌌 BUILD AND MANAGE YOUR ENERGY
Much of the equipment and tools you will be inventing are powered so you'll have to ensure you have enough of it. Weigh the pros and cons of using various types of generators that your character comes up with.

🌌 BECOME A HUB FOR OTHER PLAYERS
Build an outpost that other players actually need. Players could use your facilities for safety trade research schooling refueling - the possibilities are endless.

Don’t miss the next evolution in survival MMORPGs!

☄️Download the best space survival MMORPG now and join us in our attempt to revolutionize the gaming industry!

Voidspace is available to play on all major platforms including Android iOS (on App Store) PC Mac Linux (on Steam).
Show More >