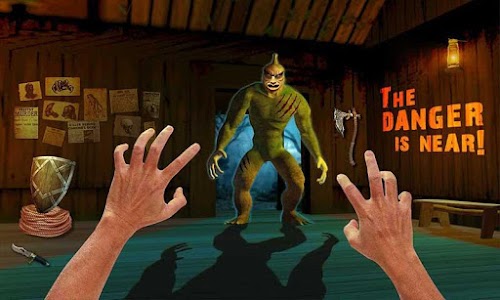 In a world overrun with creatures you’ve survived... But how long?

Out from the shadows comes your worst nightmare - the Werewolf Vampire & Bigfoot Monsters!!! Werewolf Monster Hunter 2018 Simulator Game throws you into the world of creatures; vampires werewolf zombies and big foot monsters. Subsisting in the deep forests of transylvania these deadly creatures have attacked villagers and are looking for prey. Journey through these mythical creatures to save the town begin your hunt 2018 and slay the toughest tempered monsters. Do whatever it takes to survive and kill the beasts to protect villagers in finding Bigfoot Hunting Games. Arm yourself with an arsenal of powerful weapons (silver sword combat sword axe iron shield dagger) and survive a scary night as swordsman. Kill the undead stop unkilled invasion and save people in zombie survival games.

Play as a brave monster hunter looking for mysterious monster beasts vampires werewolves and zombies in the forests near medieval town. People of town disappeared in the forest and later found dead while some began to mutate into zombies. Prepare yourself for this hunter adventure games track and must kill a way out monstrous beast in latest monster hunter games for free. Raise your sword become an ultimate monster hunter to seal these undead creatures away in hunting games. Zombies come in many forms and some zombies can be extremely infected with virus. So keep your defense up kill werewolf zombies and big foot monster latest monster hunting games.

In a place where no one is safe how far will you fight with beasts to make it out alive? "Victor" a famous monster hunter and a professional in slaying beasts arrives at outskirts of medieval town. The local folks are scared of the bigfoot beast who attacks at midnight & disappears in the shadows. Villagers hired the services of Victor to track & hunt down these mythical creatures in order to save the town. Do whatever it takes to keep the werewolf bigfoot monsters and ghastly zombie hordes at bay. Maim mow down and massacre dracula monsters and undead walkers - anything to keep medieval town save!