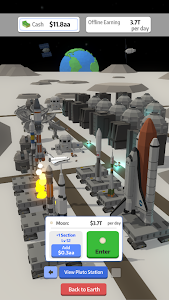 Corginaut is a mobile game that takes the player and their pet into the infinite space – limited only by the imagination. It tests the players’ ability to manage rocket thrusts speed fuel and finances.

Improved from the previous version the new Corginaut features dozens of levels each with its unique set of challenges and rewards such as unlocking special fuel upgraded rockets fuel boosters and so on. Each upgraded rocket comes with enhanced fuel and speed points.

Once the player successfully launches off the earth they land on the moon and other planetary bodies where they can explore and build colonies.

- Enjoy new challenging levels to test your thrust speed and fuel management in rockets.
- Players can earn points and rewards while playing both online and offline.
- Players can use cash rewards to buy new rockets or improve the features of existing rockets.
- Fly upgraded rockets with enhanced speed and fuel efficiency.
- Explore the moon as well as several other planets like Mars and Pluto to set up colonies.

This is a free rocket corgi game that take player into space similar to spacex this take player especially kid and children into experience of expore from our galaxy space station planets (including moon mars pluto) and the rest of the solar star system. It is a new fun game that take the idle approach that brings cool and the best gameplay to explore from our universe to milky way and to the rest of the cosmos.

For all rocketeer players who wants to becomes a cosmonaut pilot your rockets and promot your skill from rocket sientist -> space person -> moon walker -> and eventually to astronaut.

There are multiple spacecraft spaceship space shuttle and space probe that are available in the game you will encounter UFO flying saucer and different types of ships in the late game as well. Things like space probe space capsule and all sorts of alient battleships in sci-fi fiction are also in the gameplay.

In the late game there will be combats with alien where you take your cute corgi dog ino action. Upgrade your missile laser and guns to engage into arcade game action. Eliminate the enemy aliens.